CHINADAILY 2021-06-11 19:22
Editor's Note
This year, the Communist Party of China is celebrating the 100th anniversary of its founding. China Daily is publishing a series of stories looking at the tremendous changes that have occurred in provinces, autonomous regions and municipalities under the leadership of the Party. They also include stories of the people and places that have left indelible marks in the Party's path to glory.

Yunnan province will strive to develop its ecological civilization construction during the 14th Five-Year Plan period (2021-25) with the goal to build an ecological brand of "Animal Kingdom, Plant Kingdom and World Garden". 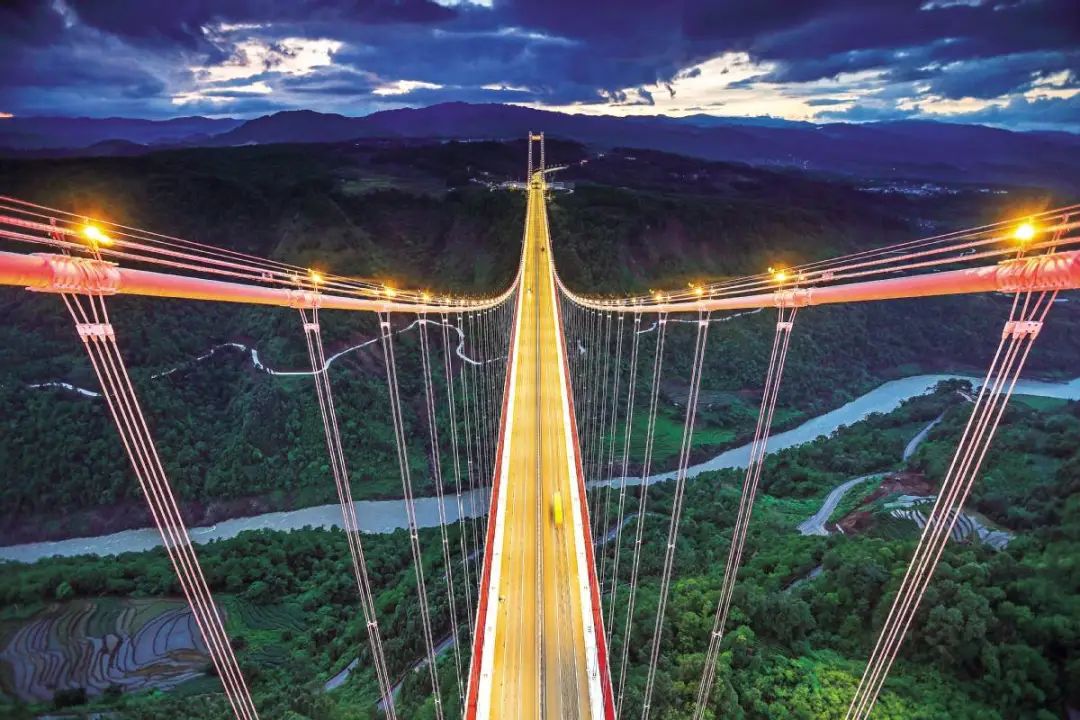 ▲ The Longjiang Bridge in Tengchong, Yunnan province. The 2,470-meter suspension bridge crosses the Longjiang River at a height of 280 meters. It will be an essential part of the Baoshan-Tengchong Expressway and will also serve as part of the China-Myanmar Highway. China Daily

Following the philosophy expounded by President Xi Jinping that "lucid waters and lush mountains are invaluable assets", Yunnan will optimize the development pattern of land and space and look to achieve remarkable results on the green transformation of its manufacturing and the lifestyle of its residents.
Aiming to be the vanguard of China's ecological civilization construction, the Southwest China province has clearly stated its five-year goals, which include a more reasonable allocation of energy resources, a vast improvement in utilization efficiency, a further decline in the total discharge of major pollutants and advancements in its ecological environment.
"A historic breakthrough has been achieved in the construction of Yunnan's ecological civilization," said Ruan Chengfa, secretary of the Communist Party of China Yunnan Provincial Committee.
During the 13th Five-Year Plan period (2016-20), green energy became the largest industry in the province, and its green aluminum and silicon production capacity ranked first in the country, Ruan said.
The average annual growth rate of the comprehensive output value of key "green food brand" industries reached more than 16 percent, and the output and benefits of industries such as tea, flowers, vegetables, fruits, Chinese medicinal materials, nuts, coffee and beef increased significantly.
Furthermore, "the water quality of the nine plateau lakes remained generally stable," Ruan said.
According to Ruan, last year, the province's forest coverage increased to 65 percent, higher than the expected 60 percent, and the percentage of days with good air quality in cities at the prefecture level and above reached 98.8 percent, exceeding the planned target by 6.8 percentage points.
He Jun, deputy head of Yunnan's Water Resource Department, said the 14th Five-Year Plan (2021-25) period is a critical era for the protection and management of the nine plateau lakes.
"Taking the improvement of water quality as the core goal, we are carrying out the consolidation and improvement of clean water and lake purification," He said.
The Yunnan provincial Party committee and the provincial government have arranged 3.6 billion yuan ($563 million) of special funds to support the protection and management of the nine plateau lakes every year from 2018. The provincial investment will increase to 4.2 billion yuan this year.
According to He, the committee and the government innovatively introduced social capital to participate in lake protection and management, and the lakes－except for Dianchi Lakehave signed third-party governance project investment cooperation agreements, which attracted a total investment of 82.9 billion yuan.
"Focusing on 'retreating, reducing, adjusting, governing and managing', we will do our best to do a good job in eight aspects to protect and manage the nine plateau lakes, including pollution interception, ecological relocation, mine improvement, river management, ecological restoration around the lakes and water quality improvement," He said.
Wetlands also play an important role in promoting Yunnan's ecological civilization construction.
With a total area of around 618,000 hectares, the province's wetlands include 15 types of freshwater wetlands, with 1,619 known wetland plants and 1,006 known wetland vertebrates both of which ranked No 1 in terms of their overall numbers and the number of species in China.
According to Zhao Yongping, deputy head of the Yunnan Forestry and Grassland Administration, the service function value of the wetland ecosystem in Yunnan is about 504.4 billion yuan per year, with an average of 894,600 yuan per hectare.
"Next, we will strengthen the protection and restoration of the important wetlands, steadily increase the wetland protection rate and gradually form a wetland protection system with wide coverage, strong connections and reasonable levels," he said.
During the 13th Five-Year Plan period, Yunnan established 10 national demonstration cities and counties for ecological civilization construction, including Xishuangbanna prefecture, Baoshan city, Kunming city and Shilin county. In addition, it built five "two-mountain" bases, including Tengchong city, the Yuanyang Hani Terrace Heritage Area and Gongshan county.
Lan Jun, deputy head of the province's Department of Ecology and Environment, said the establishment of the ecological civilization construction demonstration zone and the two-mountain bases are important projects in Yunnan's effort to lead the country's ecological civilization construction.
"We will further improve the responsibility, assessment and incentive mechanism for the construction of the ecological civilization demonstration zone, and we will strive to build a batch of demonstration projects for the construction of ecological civilization and form a batch of typical experiences and typical cases," Lan said.
Lan said Yunnan will promote green and low-carbon development by promoting the continuous optimization of industrial, energy, transportation, land use and agricultural structures.
Yunnan will promote the steady improvement of the quality of both the aquatic ecological environment and the atmospheric environment, he said.
"We will advance the reform of the ecological civilization system. Efforts will be made to improve the most stringent ecological environmental protection system, the efficient use of the natural resources system and the integrated ecological protection and restoration system," Lan said.