In the first four months, 4.06 million people successfully landed jobs in cities and the first-quarter urban surveyed unemployment rate stood at around 5.5 percent, which is within a reasonable and controllable range.

"It is not an easy task to keep domestic employment levels within a stable range due to the changing global landscape and the impact of COVID-19. The central government has always prioritized employment stability," Yu Jiadong, vice-minister of human resources and social security, said in a recent interview with Xinhua News Agency.

Yu said that the country is seeing good momentum in terms of economic development, which lays a sound foundation for employment. "Company owners and workers have also put great efforts into securing jobs." 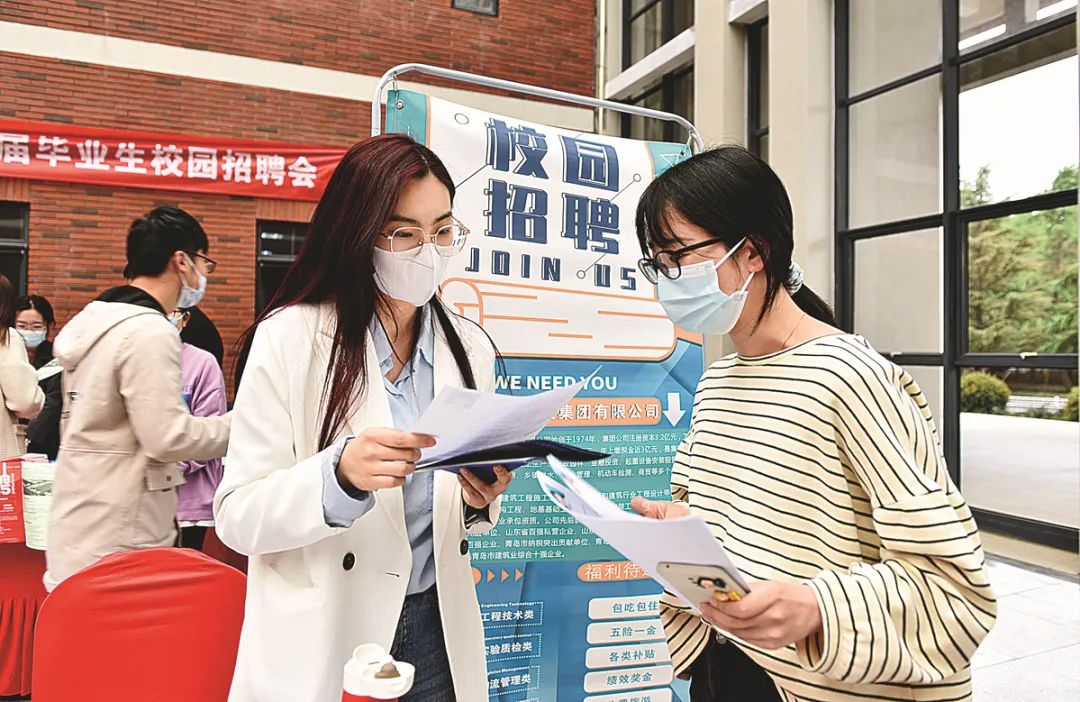 ▲ Graduates take part in a job fair in Qingdao, Shandong province, on May 10, 2022. Photo by Han Hongshuo/For China Daily

He added that the ministry has planned more detailed measures to secure company operations as they play an important role in providing employment for key groups such as college graduates and migrant workers.

Yu said that the ministry has combined some preferential policies for small and medium-sized companies to bring them optimized benefits in helping stabilize the job market.

"We've released notices to allow companies (in sectors including catering, retail, tourism and transportation) to defer insurance payments for employees, unemployment and work-related injuries. We also give these companies one-time allowances to allow them to provide skills training for workers," he said.

As for the employment of key groups such as migrant workers and new college graduates－with the latter's population reaching a record high of 10.76 million this year－Yu said more administrative assistance will be made accessible.

"For migrant workers, we will channel more resources to build up quality services and create more suitable job opportunities to let them work near their hometowns, while increasing their salaries is also important," Yu said.

The ministry will also continue to prioritize the employment of college graduates as the group is of great importance to the nation's future economic development.

He added that in addition to offering young people subsidies to encourage them to start their own businesses, the ministry will churn out more practical plans to encourage the group to fill existing vacancies.

"We will also offer them training courses and internship opportunities. The ministry has implemented a campaign to offer 1 million internships to college graduates and so far we've announced over 400,000 internship vacancies for new graduates," Yu said.

The vice-minister added that tailored services are also accessible by those graduates who are in poorer financial conditions or have disabilities in order to secure their basic livelihood.